The Khardung Pass (Khardung La in Tibetan, la means  pass in Tibetan) is a mountain pass in the Ladakh region, in the Indian state of Jammu and Kashmir, located in the heart of the Himalayas. This legendary pass is located 39 kilometers from the city of Leh and is the gateway to the Shyok and Nubra valleys. The Khardung Highway began to be built in in the 1960s, was completed in 1976, and opened to the public in 1988.

Khardung La is economically important as it is located on the historic route from Leh to Kashgar. About 10,000 horses and camels used to do this route each year, and a small population of camels can still be seen in the village of Hundar, north of the pass. Both from Leh, the southern access, and from the Nubra valley, to the north, the road is almost entirely paved. Areas where there are rockfalls may be in worse condition, but in general the road is very well maintained. Rented motorcycles and 4WDs, as well as heavy vehicles regularly pass through the Khardung Pass.

The Khardung road is closed from October to May due to snowfalls, and accidents or falls from the ground are common. Much caution and patience are recommended while driving. For travelers, it is necessary to know that a special permit is required to visit the Nubra Valley, which is a protected area of Ladakh. This permit (called Inner Line Permit) can be obtained in Leh for about 200 Rupees.

The closest town to Khardung La is Leh. Leh is connected by road from Manali and Srinagar. You can also fly from Delhi, at very low cost, with the local companies Vistara, GoAir, Air India and SpiceJet. If you do not have your own vehicle, from Leh, there is a daily bus service to Nubra Valley that passes through Khardung La. 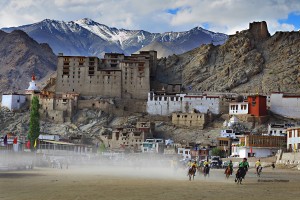 During the winter, temperatures drop to -40º and there can be 3-meter snowfalls, so traveling to Ladakh during this season is crazy. In summer the temperatures are more pleasant, during the day you can see maximums of up to 10º / 12º, but at nightfall the minimums drop to -5º.

Even in the summer season the weather can be extreme, so it is recommended bring winter clothes and keep  warm. In addition to the cold, it has to be said that the climate in this area is very dry, especially in summer. Do not forget that the pass is more than 5,000 meters high, a height at which most people, to a greater or lesser extent, suffer from altitude sickness.